Why words failed me 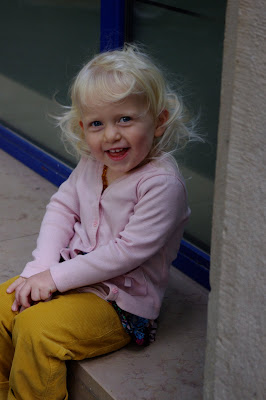 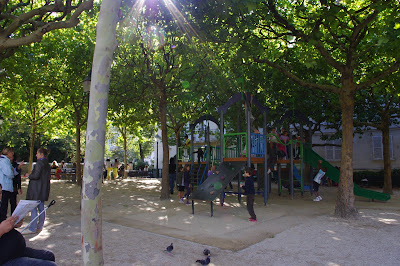 When I was twenty-one years old, a junior in college, I left my home in iowa and travelled to Paris to study for six months. My parents had arranged for me to stay with the sister of a french woman we knew from the horse world, and I would take part in a program sponsored by New York University in Paris.

After a few days sleeping off the jetleg in a temporary NYU dorm, I took a taxi to meet my french family. It was nearly nine o'clock, but the family was just sitting down for dinner when I arrived. I sat in the middle of a long table--surely seeming timid and quiet--and waited as they dished out heaping spoonfuls of meat soup. I say "meat" because I honestly don't know what kind of meat it was. I was a vegetarian; I had been for my entire life. But as I sat there, watching the soup disappear into my mouth, bite by bite, I thought, so this is the moment--I am no longer a vegetarian.

It wasn't that I liked the soup or the taste of meat; I was simply to scared to speak up for myself. I assumed I had a choice: use my poor french to tell the nice woman in whose home I was staying that I didn't care for the food, or stay silent, endure. I was fully prepared to pretend for six months, trick myself if need be, rather than embarrass myself in french. So I swallowed. Perhaps I mustered something like "C'est bonne" or "merci," and that is all.

Perhaps this is the reason I may never learn the language that well: too afraid to make mistakes, too embarrassed. In the six months that followed my french certainly did improve. I began to feel confident; I knew my way around the city, particularly the 5th district, which I walked each day--past the Pantheon, through Luxembourg gardens, down rue Mouffetard...I took classes in French, listened to lectures, wrote papers.

Why is it that I must start over now, 10 years later? We are in a different neighborhood. I don't know my way around. I feel lost.

Yesterday, at the playground I met my match: an 18 month old french toddler. Maggie and I were coming into the sandbox with our new pail and shovel. We had only just discovered the playground, hidden around the corner from our apartment.

It is a gorgeous playground; as romantic as anything in Paris. You wind around a cluster of trees to the top of a hill and it feels like you've stumbled on paradise. Couples laying on benches in the sun. Kids playing soccer. A play structure under a canopy of trees. And then there are the children. Kids howling, laughing, jumping, dashing. Kids are kids, no matter where you go, and some ways this is comforting. But what is different about this playground is the density of madness. Its as if all of Montmartre has been cooped up in their cages and suddenly let out at the same moment.

We decided to start with the sandbox, as it was a bit calmer, and seemed to be where most of the toddlers were. The moment we sat down in the sand I saw him. He eyed the pail in maggie's hands. He moved towards us. And already I felt it: paralysis.

Interventions are always complex: when do you let the kids work it out? Is it the other parent's responsibility to tell their own child no? Shouldn't you teach your child to share?

But I wasn't going to let this boy rip Maggie's new toy from her hands. I just wasn't. When he grabbed, I grabbed. I tried to mumble something in french, but mostly I felt all my language skills slip away completely. I had become a toddler myself--unable to communicate in words, grabbing and winning by strength alone.

I tried not to rip the bucket from this boy. I tried. When I looked up and saw the dad hovering there, I just kept thinking, why don't you tell your son that this toy is not his? Why don't you intervene? He never did. So I took the boys hands, pried them from the pail, and handed the pail to maggie.

And then I sat there, in the sand, feeling like a complete idiot. I had failed. completely. Words had failed me.
But Maggie played happily. She dove into the chaos on the playground. She smiled at the kids and listened and watched and climbed. She was comfortable. She was awesome.

This story doesn't have a happy ending. at least not yet. I hope my french improves. I hope. Fortunately, I do understand most french, and I did have french people ask me directions a couple times in the last week...That counts for something, right? 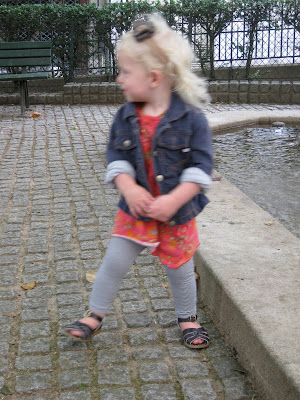 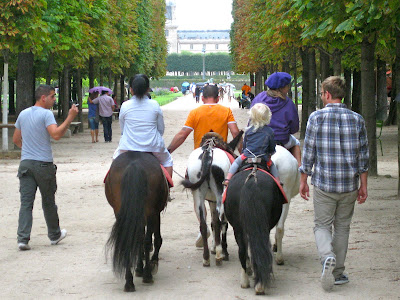 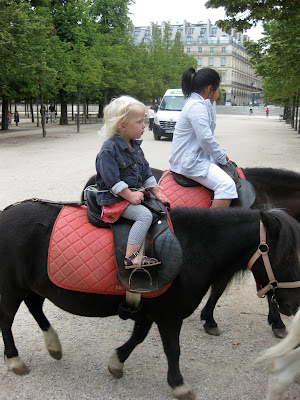 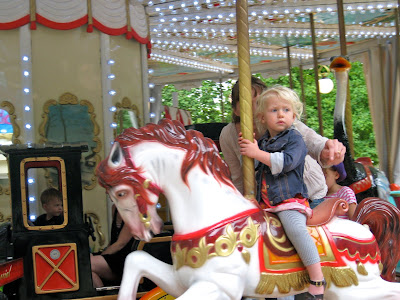 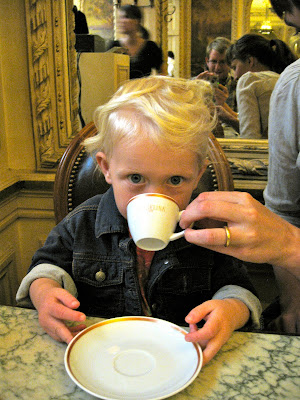 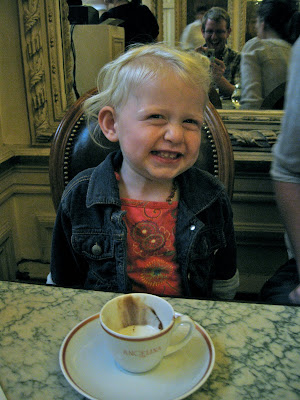 I think the pictures say it all with this one. Let's just say this birthday will be hard to top! Pony and carousel rides in the Jardin des Tuilleries followed by hot chocolat and macaroons at Angelinas? Does it get any better?
Posted by Amy at 8:20 AM 4 comments

We're here! Or at least I think we are. Night is still day, and we've spent hours in the dark telling maggie "Fia stories:" essentially, our little made up adventures about Maggie and Nanna's corgi--at the zoo, the horse stable, the park, on a hike, etc...It all feels a little like one of those dreams where you're looking for something, reaching your hands out in the dark but can't, for the life of you, get your hands, or eyes, or legs to move.

I didn't think I would ever want to travel again after the flight to paris. We had a lot of luggage--a lot. I look back now and realize that no item could be worth the pain of lugging it across the Atlantic. In total we brought almost 250 pounds of STUFF. Before you call us totally crazy, what we brought wasn't so unreasonable: 4 suitcases, a guitar, and my sewing machine (yes, a sewing machine..) Come on...this is our life...we are living abroad for a year. But after the customs line, and the baggage claim (have you ever balanced that much luggage and a car seat and a crib, and a guitar on one of those carts??) Actually we didn't have to fit the guitar on the cart because we forget it at the Charles de Gaulle airport, but that's another story. So we fill up the back of a mini van with stuff, and begin the drive towards our apartment in Montmartre.

And here is where the hero in the story comes in: Jon. Of course, my husband with infinite strength and patience. When we rented the apartment we were told it was on the fourth floor with a lift. In France, the fourth floor is actually the fifth floor, and of course there is the flight of stairs to climb to get to the lift, and after that, another small flight of stairs from the lift to the apartment. So how did we get 250 pounds of stuff up to the fifth floor after no sleep, lines, airplane exhaust in our lungs? Jon, or course. When it was all over, he was finally done, Jon came into the apartment and I watched the sweat fall in large drops from his face onto the wood table and all I could think was, after all this, how are we going to take care of our cranky, exhausted toddler?

That night we had the windows open and we could hear piano, talking, babies crying from the neighboring apartments. We looked up and saw Sacre Coeur outside our window, glowing on its hilltop, and it was kind of magical. Then it began to rain. We listened to the water falling on the stone below, and breathed in that wonderful sweet air, and for that moment, it seemed that everything would be ok.

The views from our apartment: 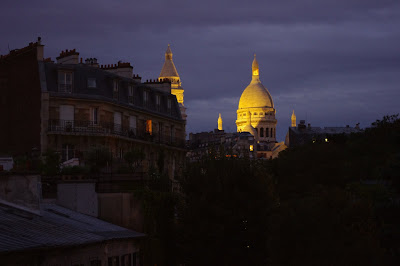 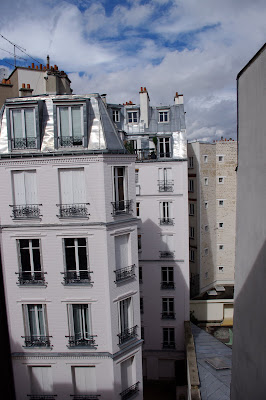 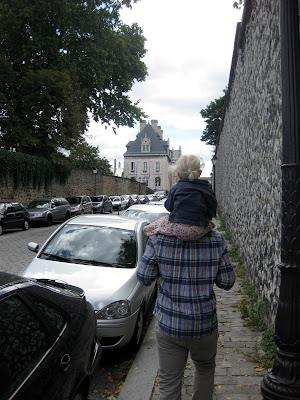